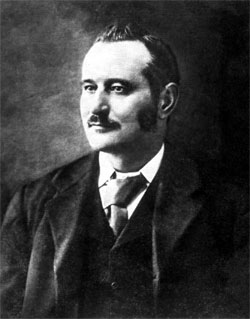 With a collection of over 1,400 songs, Gardiner should be ranked alongside the major collectors, but his collection fell into obscurity after his death in 1910. He was 'rediscovered' by James Reeves and Frank Purslow in the 1950s. Frank Purslow did a gargantuan job collating the collection and publishing about 150 of his songs in the excellent 'Marrowbones' series of songbooks 1965-1973. The books, however, were a mixture of Gardiner's and Henry Hammond's material, and Gardiner still did not quite receive the prominence he deserved. The present centenary of his collecting is doing much to further restore his reputation.

George Gardiner was born in Kincardine-on-Forth, Perthshire, and was educated at the University of Edinburgh, he then taught at the Edinburgh Academy from 1884 until 1896. H.E.D. Hammond joined the staff of the Academy in 1890, and the two men became friends. Gardiner retired from the Academy to translate and publish textbooks. He travelled widely on the continent during this period, and in 1903 he made an extensive study of the folk song of Europe. In 1904 he began collecting English folk songs with Henry Hammond in Hammond's native Somerset. Hammond then concentrated on Dorset and Gardiner concentrated on the county of Hampshire, continuing until his death in January 1910.

Hampshire has the rural villages and market towns found in all counties. It also has the industrial and maritime towns of Portsmouth and Southampton, and a strong military and naval presence. Gardiner was able to collect in this county from singers who had a wide range of occupation.

George Gardiner collected his first Hampshire song in the Twyford area near Winchester in June 1905. He called this area his first 'happy hunting ground'. He went on to explore the Itchen valley, noting songs in Ropley, Alresford, Bishop's Sutton and Itchen Abbas. He was then caught out by the classic townsman's mistake of forgetting the country cycles of labour. First haymaking, and then the various harvests of summer took the whole attention of all of the country people. Everyone was totally exhausted with this labour, and no one had energy to sing. (Cecil Sharp apparently persuaded some country singers to sing in this season, but Gardiner was a very kindly man, and would not do this). So he collated his material and planned better for next year.

1906. Gardiner started much earlier in April. He continued in the Itchen valley and Winchester, but he alternated this with collecting in Lyndhurst and Southampton. I think that he made much use of the railway. There is a note to remind himself which railway company to take for a particular village in his archive. He had a modern outlook and he used whatever transport was available. (Hampshire is well-endowed with railways, and this was even more so in Gardiner's day. There was even a Meon Valley line running down from Alton). Gardiner had now found another source of songs: the workhouses. This was very useful to him in the summer when country people were tied up with the harvests. It was mostly older people who had the songs, and Gardiner could meet lots of old people in the workhouses. In 1906, he visited the workhouses of Lyndhurst, Romsey, Andover, Southampton, Fareham, Winchester and Basingstoke.

1907. Gardiner collected again from Marchwood in the New Forest, and then again from the northeast, including Preston Candover and Axford. (Bob Copper of the Copper family followed in his footsteps about 50 years later, and he tape-recorded a few people who still sang songs in the area around Axford and Cheriton). From July onwards, Gardiner visited the workhouses again, including Portsmouth where he collected over 100 songs. He wrote about this in some detail in the Hampshire Chronicle 4/1/1908.

In 1908 he visited a number of workhouses from August, including Petersfield and Catherington, and he also visited villages in the northeast.

In 1909 he visited villages in the New Forest and the northeast. He went just over the border to Farnham and Westbourne workhouses. But he also seemed to be spreading his wings further to Wiltshire workhouses, getting right over to Trowbridge and Westbury. He does not seem to have realised that this would be his last year alive. If he had, I think he would have finished collating the songs he had collected already, and attempted to get them published before his death. But we do not know for certain: he may have thought it more important to save more songs for posterity, and to bequeath them to the Folk Song Society.

If Gardiner's singers are plotted on a map, it becomes clear that many singers were found in some areas and few in others. Gardiner does not seem to have collected in the southern New Forest or the Isle of Wight. I think this is because another collector, Alice Gillington, was collecting there. It can be seen that there was a large area of singing communities in a rough triangle from Winchester to Alton to Basingstoke. There was also another strong cluster in the northern New Forest. But there were large areas where he found no singers. The area to the north and west of Winchester looked promising, but he says he did not find a single song there. There are even a number of workhouses where he seems to have found no singers (e.g. Romsey and Droxford). So the fading singing population had already died out in some places. This shows that Gardiner was only just in time.

Gardiner seems to have collected at least until September 1909. He appears to have been suffering from kidney disease in his final year, and probably for longer. He died in his native Scotland, in Melrose Hydro, on 10th January 1910.

Although he sang himself, and had great skill in analysing music, Gardiner did not trust himself to do the music notation. So he engaged skilled musicians to note the tunes. He found the singers, chose the songs, noted the words, and then he paid the musicians to do his notation. He used Henry Balfour Gardiner and then Charles Gamblin in the north, and John Guyer in the south. All three seem to have had an interest in traditional folksong.

Henry Balfour Gardiner was a minor composer who knew Lucy Broadwood and Percy Grainger well. There is a song which bears his name in the Lucy Broadwood collection dated 1899. He keenly told Percy Grainger that he would buy a phonograph to record singers in 1907. He seems to have become disillusioned, however, when Cecil Sharp refused to publish his folksong arrangements. George Gardiner attempted to smooth things over by commissioning him to work on some folk song arrangements, but Balfour Gardiner seems to have ceased folk song notation after this.

Charles Gamblin was a multi-instrumentalist music schoolteacher who ran a very popular community orchestra. He was also the organist at St Cross, the ancient church that served the medieval almshouse complex just south of Winchester. He was highly respected in Winchester: large numbers turned out for his funeral in the 1920s. Five songs in the collection have his name as the source, so he seems to have learned folk songs long before he met George Gardiner. He was an elderly man, and seems to have decided to retire from collecting some of his musical activities in 1909. But he seems to have worked well at notating Gardiner's songs in previous years.

John Fisher Guyer was also a music teacher, but he seems to have maintained himself through private tuition. His instrument was the violin and he lived in Southampton. He was in Edinburgh in the 1890s and so he may well have met Gardiner before he came to Hampshire. There are two postcards from Guyer, showing that he was studying ballads in the British Museum for Gardiner. He seems to have worked closely with Gardiner in his final years, checking the manuscripts for publication. He revisited some of Gamblin's singers to give a second opinion. He died of pneumonia in 1915.

Gardiner did not rely on middle class informants like some other collectors. He had to go and look for the singers himself. He would drive to a locality in a horse carriage, and he would ask the driver if he knew of any singers. He would ask the Blacksmith or Innkeeper when he arrived. He would walk in the localities and presumably ask any men that he met if they knew of singers. (It was not polite to address unknown women in those days). He seemed, like Sharp and other collectors, to have a natural rapport with the singers. Perhaps his Scottish accent served to remove the class barrier that could thwart some collectors. He was certainly not proud. He remarks that he spent two pleasurable afternoons noting songs from a farmer as he milked his cows, and later a similar experience in a hut with a shepherd and his dog. He seems to have understood the language of his singers very well. But in his early note books there are some interesting examples of the local accent: 'Ranal' for Randall, 'Charnsford' for Chandler's Ford and 'Wharton' for Waltham! Gardiner certainly seemed to get on well with his singers. He loved to sing the songs himself, and we can imagine him swapping songs with the locals. He would have communicated his respect for the songs and for the singers as well. 'Besides a singer is always a jolly good fellow!' he wrote in one of his articles. He got on so well with one couple (probably Daniel and Sarah Goodyear of Axford) that the wife arranged for all the local singers to gather at her house, so that the material could be taken down more easily. Here Gardiner was able to collect from women as well as the men that he could meet in pubs and more public places.

There was a flowering of appreciation of George Gardiner's Hampshire Song collection in the 1970s after Frank Purslow's popular publications. The centenary of Gardiner's collecting 2005-2010 has also prompted a number of activities in Hampshire. With the publication of every one of his songs on the EFDSS's Take 6 online, his collection is now available to everyone around the world. This will hopefully achieve the full recognition that he deserves as Hampshire's greatest collector, and one of England's greatest collectors of traditional folk song.

Also for information on George Gardiner in Hampshire with reference to performance of the songs see: http://www.communigate.co.uk/hants/gag/

There is an article on 'George Gardiner, Ralph Vaughan Williams and the FSS Journal of 1909' by Bob Askew at: http://www.mustrad.org.uk/articles/gardiner.htm

Frank Purslow, who worked on the Gardiner archive from the 1950s to the 1970s is the source for some of the above material. His article 'The George Gardiner Folk Song Collection' in Folk Music Journal volume I number 3 1967 129-157, together with his 'Marrowbones' series of songbooks did much to publicise Gardiner's work.

See VWML Online for a brief biography of Gardiner.