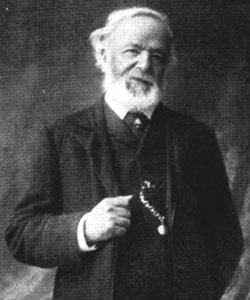 He was born on 11th December 1826 at 34 The Bishopric, Horsham, West Sussex, the second youngest of nine children. His father William Burstow (born 1781) worked as a clay tobacco-pipe maker, assisted by his wife Ellen (died 1857). The Bishopric, commonly known as “The Rookery”, was the poorest and roughest part of Horsham, and the Burstow home served, in Henry’s own words, as “‘factory’, dwelling house and shop” (Reminiscences p9 [1]). A shoemaker for all of his working life, Burstow’s fame rests principally upon his singing: the size of his repertoire, and his importance to the late nineteenth / early twentieth century English folksong revival. We know more about his life than that of the average nineteenth century artisan through the writings of folksong collector Lucy Broadwood, and his own “Reminiscences of Horsham”, put together and brought into print by Horsham local historian William Albery.

Burstow began to attend the infant school run by a Miss Sayers in the Bishopric “almost as soon as I could toddle” (Reminiscences p22 [2]), with his first year’s fees paid for by a generous Quaker, Mr Pollard. He subsequently attended the Horsham British Schools, the Church School (from 1834) and Collyer’s Free School (1838-1840).

In 1840 he was apprenticed to Jim Vaughan to learn the boot and shoemaking trade. This was an important local industry which employed forty to fifty men, “good hard-workers and sound beer-drinkers to a man” (Reminiscences p23 [3]). For the first year Burstow worked for no pay. In the second he earned two shillings a week, and this rose by one shilling a week at the end of each year that he spent in apprenticeship. After spending around ten years with Vaughan, he went to work for Mr Gilburd, with whom he stayed until 1880, making mainly women’s boots at one shilling and sixpence a pair. Burstow records that on average he earned fifteen shillings a week, for a week’s work of sixty to seventy hours. He never earned more than nineteen shillings and sixpence - and this in a week when he made thirteen pairs of boots, working every available hour.

Henry Burstow married Elizabeth Pratt (1833 - 1909), the daughter of a Horsham gardener, in 1855. On his wedding day Burstow rang peals “all day long” (Remiscences p102 [4]) in company with seven other shoemakers, including the Warnham musician and parish clerk Michael Turner.

Burstow took up bellringing soon after he was apprenticed, at the instigation of John Vaughan, his master’s father, who was Sexton and head bellringer (and who paid his three shilling entrance fee). Bell-ringing became one of his chief pursuits, which he pursued until very late in life. Burstow regretted that when he joined the belfry the Horsham ringers had neither the skill nor the inclination to recreate the change-ringing feats of their late eighteenth century predecessors. However Burstow made the acquaintance of ringers at other parishes - principally Warnham and Newdigate - and was able to develop his own skills. He became well-known locally as a ringer, and in the 1860’s Horsham again became a place where change-ringing records were set.

Burstow rang in 55 Sussex, Surrey and Kent churches, and taught in 15 of these. Both ringing and teaching brought in welcome supplementary income, but they fulfilled primarily a social function. He recalls that at one time he would walk the eight miles to Newdigate every Saturday evening, ring for around three hours, then “adjourn to the ‘Six Bells’ Public House for a jollification, drinking and smoking and song singing in turn” (Reminiscences p99 [5]) - although it is worth noting that Burstow himself neither smoked nor drank. Leaving home after midnight he would then walk back to Horsham, returning home between two and three o’clock.

In an age when singing and music-making were very much a part of everyday life, Burstow was recognised within his community as a singer of note. He kept a list (reprinted in “Reminiscences” [6]) of 420 songs which he knew by heart. Of these he had learned 84 from his father, who himself knew some 200 songs, and some from his mother. Burstow records the names and occupations of other men from whom he learned songs: some were learned from fellow workers or bellringers, some at “Country Wills” in the taprooms of local public houses - the words often exchanged for a pint of beer - while others came from ballad sheets bought at fairs.

In 1892-93 he lent his list of songs to Lucy Broadwood. In common with other collectors of the period she had strong preconceptions as to what was worth preserving, and she selected the 50 or 60 songs from the list which she considered to be “of the traditional ballad type” (English Traditional Songs and Carols p xi). Burstow visited Broadwood’s home at Lyne near Rusper and she collected 46 songs from him in all (in practice Broadwood, or the Horsham organist Herbert Buttifant, noted down the tune, while Burstow would write out the words and send them on to her). Subsequently more of Burstow’s songs were noted by Ralph Vaughan Williams, who lived at Leith Hill Place in Surrey (31 songs collected between 1903 and 1907) and W.H.Gill (a small number in 1911). Many of these were published in books such as Broadwood’s “English Traditional Songs and Carols” and in the Journal of the Folk-Song Society. Singers from Sussex provided a disproportionately large number of items in the early Journals, and of these 118 titles Burstow was the source of 31. It is ironic, however, that the collectors’ romantic vision of illiterate singers living in rural isolation simply did not fit the facts of Burstow’s life.

In 1907 Vaughan Williams phonographed two songs from Burstow. Unfortunately these recordings are now lost, but Lucy Broadwood published a full transcription of one, “Bristol Town” (English Traditional Songs and Carols p114-115), which illustrates the traditional singer’s ability to adapt a song’s tune and phrasing verse by verse.

While Burstow was feted by the pioneers of the folksong revival, he and his wife faced severe financial hardship. In 1907 they were in danger of being sent to the Workhouse: with no children to support them, their sole income came from Parish Relief, a small sum from sub-letting part of their cottage, and gifts from old friends and bellringers (even though Burstow was now too old to ring regularly). A jeweller, Jury Cramp, opened a subscription to provide the Burstows with a lump sum, while saddler William Albery organised a fund from which they could receive a pension of ten shillings a week. Albery had first met Burstow when they were choirboy and head bellringer respectively. Albery’s interest in local history had later led him to befriend the old man, and he now hit upon the idea of a history of Horsham - based upon Burstow’s personal and family memories, but expanded by reference to other sources - as a way of helping him financially. It became apparent that Burstow might not live to see the publication of a major work, so Albery scaled down his plans and arranged for the publication of “Reminiscences” in 1911. Two impressions - of five hundred and four hundred - were printed, and after the deduction of costs all income went to Burstow.

The book’s title is apt: it is neither a formal history of the town nor an autobiography (written throughout in Burstow’s own words, Albery’s name appears nowhere in the work). Its importance is in the picture it presents of small town life through the eyes of a working man. Burstow tells us of the hardships of everyday life, of political events (notably the passing of the 1832 Reform Bill, and the corruption and disorder surrounding elections), and of features of the traditional calendar - May Day, November 5th, and St Crispin Day when Horsham performed its own version of “Rough Music”. The book is also an extremely rare example of a traditional singer’s words and thoughts being preserved in print, providing important details on how songs were transmitted, and the social context of music-making.

Saved from the Workhouse, Burstow seems to have become something of a local celebrity. He was invited to sing in front of a large audience at a silver band concert in the Kings Head Assembly Room in 1908, while articles on Burstow began to appear in local newspapers and national magazines. These focussed on his singing, his bellringing, his prodigious memory and fascination with figures, and even his atheism. A religious and political freethinker, convinced of the truth of Darwinism and not inclined to conceal his beliefs, Burstow encountered some prejudice - indeed some gave his beliefs as a reason for not contributing to the funds set up to relieve his financial distress. However the Horsham clergy generally accepted his candidly-expressed views - “I fetch ‘em in, and I leaves you to drive ‘em away” the enthusiastic bellringer is reported to have told one vicar (quoted in Reminiscences p xv) - and the Unitarian Albery was able to persuade the Free Church Society to sponsor the publication of “Reminiscences”.

Burstow died on 30th January 1916 at his home in Spencer’s Road, Horsham and was buried on 4th February at Hill’s Cemetery; several Sussex newspapers carried fairly substantial obituaries. He had lived all his life in the town - the first 42 years in the Bishopric - spending only six nights away from home. The memorial card circulated to his friends bore an epitaph that he had written himself:

'In ringing and singing I took great delight,
And keeping good company by day and by night;
Many an hour the bell I have tolled,
And now I am dead may the Lord receive my soul.'

Burstow was undoubtedly an exceptional character, and an important figure within his community. However it is largely through good fortune that we know as much as we do about the man - factors such as his literacy, his passion for maintaining lists and records of events in his notebooks, the fact that he came to the attention of two important locally-resident folksong collectors, the interest and commitment of Albery, his longevity.

* Titles marked with an asterisk are those Henry learned from his father, of which 'Travel the Country Round' was the first.