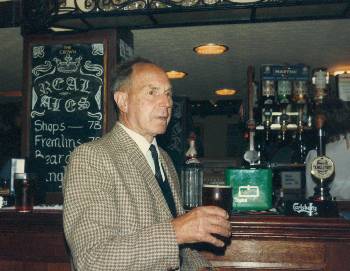 Born 9th July 1913, at Kenardington, into a musical family. His father, also Charles, was employed as mower on a farm at Kenardington, and played tenor horn in both Kenardington and Woodchurch Bands. Charlie's great-grandfather had played the flute, while his grandfather Tom played clarinet. There is a photograph of Woodchurch Band from around 1920, which shows Charlie's father and grandfather, and Charlie in the front row, holding a clarinet. Band practices often ended with a sing-song, and although Charlie was too young to go into the pub, he picked up a number of songs this way.

Other songs he learned in adulthood from local men - typically older than him - sometimes buying a pint of beer in return for the words (e.g. Three Maidens a-Milking Did Go "I learnt that off an old man, old Billy King. I gave him a pint of beer. And you got it for nothing - 4d, that was a lot of money then.") He sang in the pub and at village hall events such as smoking concerts, and naturally his repertoire included songs learned from books such as the News Chronicle Song Book, "nigger minstrel" songs, and standard items such as The Village Pump as well as traditional material.

Between the wars Charlie played clarinet in bands for dances in local village halls. After the Second World War he took up playing the tenor horn with the Rye Town Band. When that band folded, he joined the Peasmarsh Band, and later the Cranbrook Town band; he was an active bandsman practically for the rest of his life.

When Charlie left school he worked on the same farm as his father, but found that he could earn more by stone-breaking and road-building. It was while working as a stone-breaker that he first met Lilian Gill (Lily), whom he married in October 1938. During the Second World War he worked on a market garden, as well as serving in the Home Guard. After the war he worked in a variety of agricultural jobs, ending his working life as an employee of the Southern Water Authority, maintaining the banks of the Royal Military Canal.

Charlie Bridger became known to the folk revival in 1983. Andy Turner was researching Kentish singers and was given Charlie's name by his contemporary Mr. Charles Beale, son of Albert Beale of Kenardington. Andy recorded a number of Charlie's songs, and organised occasional music and song sessions at Charlie's local, the Crown Inn, Stone-in-Oxney, at which it was obvious that he very much enjoyed being the centre of attention once again. Mike Yates recorded some half dozen songs from Charlie in April 1984, most of which have been released on Veteran or Musical Traditions. Charlie was invited to attend the National Folk Music Festival at Sutton Bonington, 1985, but was unable to travel owing to ill health. He did however make a brief appearance at the English Country Music Weekend at Frittenden, September 1988, a couple of months before his death.

'I went to visit Charlie at his home in Kent because I had been told about his superb version of the song Three Maidens a-Milking Did Go... Charlie had worked for most of his life at a near-by stone quarry and I am sorry that I only managed to see him on one occasion.'

Part of the booklet notes, written by Mike Yates, to the Musical Traditions Records CDs The Birds Upon the Tree (MTCD333)

All of these are on the Musical Traditions CD, Won't you Buy my Pretty Flowers? (MTCD377), with the exception of 'Buttercup Joe', 'The Farmer's Boy' and 'Silver Moon'.

Copies of Mike Yates' recordings are held by the British Library Sound Archive.